THE WOODLANDS, Texas, May 19, 2022 /PRNewswire/ — Woodforest National Bank® has been selected as a recipient of the 2022 Cornerstone Award by the Texas Bankers Foundation for its Community Investment Program Grant Support with the Federal Home Loan Bank of Dallas (FHLB Dallas). The honor was announced at the Texas Bankers Association’s 137th Annual Convention during a special awards luncheon. 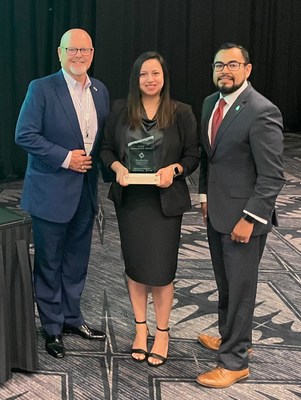 “It is our great pleasure to recognize Woodforest National Bank. These awards celebrate the banks and bankers who have made a commitment to positively impact their communities,” said Chris Furlow, president & CEO of the Texas Bankers Association. “We are honored to congratulate them on their efforts.”

“Disaster recovery and revitalization and stabilization are key components of our community development strategy and supporting affordable housing and other initiatives that preserve homeownership is important to us. We value the opportunity to work with FHLB Dallas by connecting them to community partners to provide grants that assist low-income homeowners continuing to struggle in times of hardship across the communities we serve,” said Jay Dreibelbis, President and CEO, Woodforest National Bank.

For further information about the Texas Bankers Foundation, visit www.texasbankers.com/Foundation and check out Texas Banking Magazine, the official publication of the Texas Bankers Association, that will include an upcoming special feature on the 2022 winners.

Celebrating over 40 years of community banking service, Woodforest National Bank has successfully stood among the strongest community banks in the nation, proudly offering outstanding customer service since 1980. Woodforest currently operates over 760 branches in 17 states across the United States and is an Outstanding CRA-rated institution. For more information about Woodforest National Bank, please visit www.woodforest.com.

Founded in 1885, the Texas Bankers Association (TBA) is the oldest and largest state banking association in the United States. TBA advocates for its members in Austin and Washington; trains more than 10,000 community bankers annually; provides nationally recognized banking products and services; and proudly invests in Texas communities through financial literacy, scholarship and charitable activities.