Posillico Civil, a leading New York based civil construction firm with operations in the Northeast and Texas acquires Martins Construction, a premier heavy highway and bridge construction company based in the Mid-Atlantic region.

FALLS CHURCH, Va., June 14, 2022 /PRNewswire/ — Posillico Civil, Inc., a 76 year old family-owned civil construction firm has acquired Martins Construction Corp., a premier heavy highway and bridge construction company in the Mid-Atlantic region. Just as the country is about to see a surge in infrastructure spending, the founders of Martins, reached the decision to retire, creating a tremendous opportunity for the right buyer. After careful review and deliberation, the Martins executive team selected Posillico as the best fit to continue its legacy. The acquisition also presented an exciting opportunity for Posillico to add an already established and successful Mid-Atlantic Division to its fast-growing national presence. The move to acquire Martins first started in September 2021, the process took eight months, and the deal was signed on April 29, 2022. All of the employees of Martins will remain with the company and continue to operate under the Martins brand and continued leadership of Pooya Azar, who will serve as COO.

Joseph K. Posillico, Posillico’s President/CEO and Partner stated, “The acquisition of Martins fits perfectly into Posillico’s mission of setting the standard for excellence in the construction industry relative to infrastructure, quality of life, and making a difference by using innovation and solid relationships at all levels. We feel that the significant synergies amongst the cultures of Posillico and Martins as well as our mutual commitment to safety, quality and client service are such that the merger of our two operations will be seamless.”

Azar stated, “By purchasing Martins, Posillico is acquiring a construction firm that is well-positioned to benefit heavily from the massive increase in infrastructure spending in the coming years. We selected Posillico, amongst other compelling offers, because of their strong leadership, successful acquisition history, compatible family-operated culture and exceptional financial strength.” Azar stated further that, “With Posillico’s added bonding capacity and vast resources, Martins will now have access to the necessary technology and capital to further expand its reach and take its operation to the next level.”

For four generations, Posillico has combined an ironclad commitment to quality and performance with an unequaled family work ethic, making the company a leader in public works projects. Incorporated in 1946 under Joseph D. Posillico, Sr., the company has grown to become one of the top engineering contracting firms in the New York Tri-State area. Posillico has built its reputation from its complex, public projects in the New York area. It has worked with most government agencies and leading private development companies to improve New York’s infrastructure over the better part of a century.

Similarly, Martins has established a reputation for reliability and excellence over 30 years of performing some of the most challenging and visible bridge construction and rehabilitation projects of the vibrant National Capital Region. Since the promotion of Pooya Azar to the executive team in 2015 as VP of Operations, the company’s range and scope of capabilities have grown exponentially to covers the full array of bridge construction specialties, with a core focus on complex bridge rehabilitation projects. Based out of Falls Church, VA, Martins has continually expanded its capacity and reach and has successfully performed projects of up to $40M in the Mid-Atlantic, spanning from southern VA to northern MD. 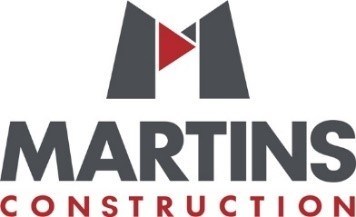