VANCOUVER, BC, April 12, 2021 /CNW/ – New Pacific Metals Corp. (“New Pacific” or the “Company”) (TSX: NUAG) (OTCQX: NUPMF) is pleased to announce that the Company has signed an agreement with a private Bolivian company (the “Vendor”), to acquire a 98% interest in the Carangas silver project (the “Carangas Project” or the “Project”), located in the Oruro Department, Bolivia. New Pacific will cover 100% of the future expenditures on exploration, mining, development, and production activities. The agreement has a term of 30 years and is renewable for an additional 15 years. An initial discovery diamond drill program is planned to commence upon receipt of the related permit from the local authorities.

Dr. Mark Cruise, CEO of New Pacific, stated, “The addition of the Carangas Project fits well with the Company’s strategy to become a premier Latin American focused precious metal explorer and developer. Initial field work, including target generation, positions us well for a successful drill program and compliments our planned exploration programs at our Silverstrike Project, in addition to the advanced exploration and development studies currently in progress on our flagship Silver Sand project.”

The Carangas Project consists of two exploration concessions totaling 6.25 square kilometers (“km”), located approximately 180 km southwest of the city of Oruro, in southwest Bolivia (Figure 1). Situated in the Bolivian altiplano at an average elevation of 3,800 m, access to the Project is via paved Highway 12 and a municipally maintained 30 km gravel road.

Geologically, the Project lies within the South American Epithermal Belt which hosts large precious metal deposits and operations in neighboring countries but remains under-explored in Bolivia. The Project is comprised of a Tertiary volcanic complex approximately 1.6 km long in east-west direction and 1.4 km wide in north-south direction, which stands 150 m above the surrounding fluvial plains. An ephemeral stream divides the volcanic complex into two separate domes known as West and East Domes, respectively (Figure 2).

Figure 1: Location of the Carangas Project in the Department of Oruro, Bolivia 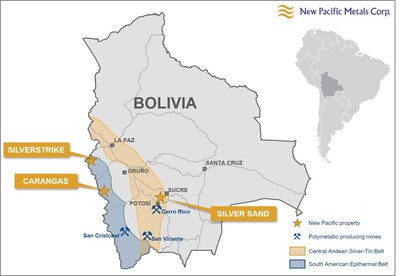 Figure 2: Satellite Imagery of the Carangas Project, Bolivia, including West and East Domes 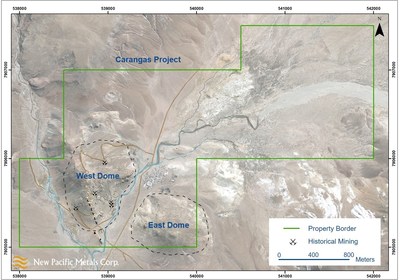 The Domes are dissected by a series of laterally extensive, steeply dipping to sub-vertical, extensional fault and fracture zones of half meter to more than one meter wide, predominantly striking east-west, west-northwest and northwest. Silver-rich polymetallic mineralization occurs as millimeter to multi-meter-wide veins (which were historically exploited), veinlets and disseminations in the matrix of the breccias and/or associated volcanic host units.

The area between the West Dome and East Dome is a flat valley, approximately 200 m wide, filled by fluvial sediments (Figure 2).

HISTORY OF MINING AND EXPLORATION

Mining is thought to have commenced in the sixteenth century and continued intermittently until the early twentieth century. The Project, and in particular West Dome, contains extensive surface workings in addition to underground mine adits, shafts and associated processing and smelting infrastructure. There is no active mining at the present time.

A total of 282 characterization samples and 729 continuous channel rock chip samples were collected from surface outcrop, underground mining faces, and open pit walls. The grab samples returned an average silver grade of 229 g/t (range of 1 g/t to 1,950 g/t); an average lead grade of 1.02% (range of 0% to 7.33%), and an average zinc grade of 0.16% (range of 0% to 3.28%), reflecting the presence of widespread geochemically anomalous mineralization. In general, continuous chip samples intercepted multiple wide mineralized zones, where outcrop or underground workings are accessible. Table 1 contains a summary of selected composite intervals of continuous chip samples. 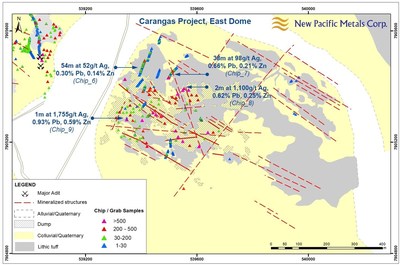 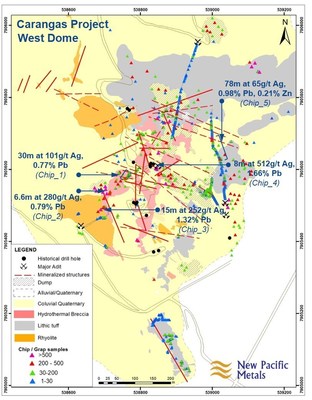 NEAR-TERM STRATEGY AND NEXT STEPS

Based on the historical mining activities evidenced by widespread mine dumps and numerous surface and underground mining workings, historical exploration results, and the results of the Company’s initial exploration programs, the Company believes that the Carangas Project has the potential to host near surface bulk tonnage mineralization and high-grade mineralization, controlled by narrow structures, at relatively shallow depths.

Permitting is in progress and the Company plans an initial discovery diamond drill program of up to 5,000 m in 2021. Upon completion of the program, New Pacific will provide an update on the results. Contingent on these drill results, additional drilling may be conducted to expand upon and define any new discoveries.

All samples in respect of the exploration program at the Carangas Project, conducted by the Company and discussed in this news release, were shipped in securely-sealed bags by New Pacific staff in the Company’s vehicles, directly from the field to ALS Global in Oruro, Bolivia for preparation, and ALS Global in Lima, Peru for geochemical analysis. ALS Global is an ISO 17025 accredited laboratory independent from New Pacific. All samples are first analyzed by a multi-element ICP package (ALS code ME-MS41) with ore grade over specified limits for silver, lead and zinc further analyzed using ALS code OG46. Further silver samples over specified limits are analyzed by gravimetric analysis (ALS code of GRA21).

The scientific and technical information contained in this news release has been reviewed and approved by Alex Zhang, P. Geo., Vice President of Exploration, who is a Qualified Person for the purposes of National Instrument 43-101 — Standards of Disclosure for Mineral Projects (“NI 43- 101”). The Qualified Person has verified the information disclosed herein, including the sampling, preparation, security and analytical procedures underlying such information, and is not aware of any significant risks and uncertainties that could be expected to affect the reliability or confidence in the information discussed herein.

Certain of the statements and information in this news release constitute “forward-looking statements” within the meaning of the United States Private Securities Litigation Reform Act of 1995 and “forward-looking information” within the meaning of applicable Canadian provincial securities laws. Any statements or information that express or involve discussions with respect to predictions, expectations, beliefs, plans, projections, objectives, assumptions or future events or performance (often, but not always, using words or phrases such as “expects”, “is expected”, “anticipates”, “believes”, “plans”, “projects”, “estimates”, “assumes”, “intends”, “strategies”, “targets”, “goals”, “forecasts”, “objectives”, “budgets”, “schedules”, “potential” or variations thereof or stating that certain actions, events or results “may”, “could”, “would”, “might” or “will” be taken, occur or be achieved, or the negative of any of these terms and similar expressions) are not statements of historical fact and may be forward-looking statements or information. Such statements include, but are not limited to: statements regarding anticipated exploration, drilling, development, construction, and other activities or achievements of the Company; timing of receipt of permits and regulatory approvals; and estimates of the Company’s revenues and capital expenditures.

Forward-looking statements or information are subject to a variety of known and unknown risks, uncertainties and other factors that could cause actual events or results to differ from those reflected in the forward-looking statements or information, including, without limitation, risks relating to: global economic and social impact of COVID-19; fluctuating equity prices, bond prices, commodity prices; calculation of resources, reserves and mineralization, general economic conditions, foreign exchange risks, interest rate risk, foreign investment risk; loss of key personnel; conflicts of interest; dependence on management, uncertainties relating to the availability and costs of financing needed in the future, environmental risks, operations and political conditions, the regulatory environment in Bolivia and Canada, risks associated with community relations and corporate social responsibility, and other factors described under the heading “Risk Factors” in the Company’s Annual Information Form for the year ended June 30, 2020 and its other public filings.

This list is not exhaustive of the factors that may affect any of the Company’s forward-looking statements or information.

The forward-looking statements are necessarily based on a number of estimates, assumptions, beliefs, expectations and opinions of management as of the date of this news release that, while considered reasonable by management, are inherently subject to significant business, economic and competitive uncertainties and contingencies. These estimates, assumptions, beliefs, expectations and options include, but are not limited to, those related to the Company’s ability to carry on current and future operations, including: the duration and effects of COVID-19 on our operations and workforce; development and exploration activities; the timing, extent, duration and economic viability of such operations; the accuracy and reliability of estimates, projections, forecasts, studies and assessments; the Company’s ability to meet or achieve estimates, projections and forecasts; the stabilization of the political climate in Bolivia; the Company’s ability to obtain and maintain social license at its mineral properties; the availability and cost of inputs; the price and market for outputs; foreign exchange rates; taxation levels; the timely receipt of necessary approvals or permits, including the ratification and approval of the Mining Production Contract with COMIBOL by the Plurinational Legislative Assembly of Bolivia; the ability to meet current and future obligations; the ability to obtain timely financing on reasonable terms when required; the current and future social, economic and political conditions; and other assumptions and factors generally associated with the mining industry.

CAUTIONARY NOTE TO US INVESTORS

The disclosure in this news release and referred to herein was prepared in accordance with NI 43-101 which differs significantly from the requirements of the U.S. Securities and Exchange Commission (the “SEC”). The terms “proven mineral reserve”, “probable mineral reserve” and “mineral reserves” used in this news release are in reference to the mining terms defined in the Canadian Institute of Mining, Metallurgy and Petroleum Standards (the “CIM Definition Standards”), which definitions have been adopted by NI 43-101. Accordingly, information contained in this news release providing descriptions of our mineral deposits in accordance with NI 43-101 may not be comparable to similar information made public by other U.S. companies subject to the United States federal securities laws and the rules and regulations thereunder.