NEW YORK, July 11, 2021 /PRNewswire/ — IMAX Corporation (NYSE: IMAX) soared to a $12 million debut for Marvel Studios’ “Black Widow,” reaching its highest grossing opening weekend of the pandemic era in 11 markets worldwide, including North America. At the resurgent domestic box office, “Black Widow” broke pandemic-era records for IMAX® across the board — delivering the Company’s biggest opening weekend box office, indexing, and per screen average since March 2020. The film grossed $7.2 million across IMAX screens in North America, earning 9% of the domestic box office and a per screen average of $19,000. 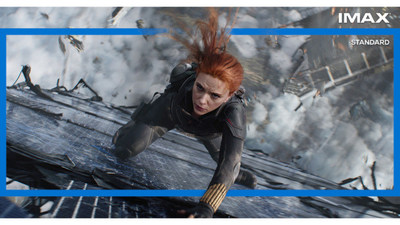 “The strong results for ‘Black Widow’ confirm that where the pandemic is under control, audiences can’t wait to get back to the movies and The IMAX Experience,” said Rich Gelfond, CEO of IMAX. “Hollywood blockbusters continue to gain ground at the box office with each successive release, and that bodes very well for the many films lined up for exclusive worldwide theatrical release this fall and beyond.”

IMAX, an innovator in entertainment technology, combines proprietary software, architecture and equipment to create experiences that take you beyond the edge of your seat to a world you’ve never imagined. Top filmmakers and studios are utilizing IMAX theaters to connect with audiences in extraordinary ways, and, as such, IMAX’s network is among the most important and successful theatrical distribution platforms for major event films around the globe.

IMAX is headquartered in New York, Toronto, and Los Angeles, with additional offices in London, Dublin, Tokyo, and Shanghai. As of March 31, 2021, there were 1,652 IMAX theater systems (1,567 commercial multiplexes, 12 commercial destinations, 73 institutional) operating in 84 countries and territories. Shares of IMAX China Holding, Inc., a subsidiary of IMAX Corporation, trade on the Hong Kong Stock Exchange under the stock code “1970.”

IMAX®, IMAX® Dome, IMAX® 3D, IMAX® 3D Dome, Experience It In IMAX®, The IMAX Experience®, An IMAX Experience®, An IMAX 3D Experience®, IMAX DMR®, DMR®, IMAX nXos® and Films to the Fullest®, are trademarks and trade names of the Company or its subsidiaries that are registered or otherwise protected under laws of various jurisdictions. More information about the Company can be found at www.imax.com. You may also connect with IMAX on Instagram (https://www.instagram.com/imax), Facebook (www.facebook.com/imax), Twitter (www.twitter.com/imax) and YouTube (www.youtube.com/imaxmovies).